Paul Gambaccini has claimed Sir Elton John was “very upset” about his fallout with George Michael. The 70-year-old superstar had been friends with the singer, who was found dead at his Oxfordshire home on Christmas Day. And he says he had been trying to encourage his Wham! star pal to clean up his act as […]

“There’s someone from El Paso I’m a big fan of,” Elton said just moments before he dedicated “Don’t Let The Sun Go Down On Me” to Khalid. “He’s going to be a big star.” The musical bro-mance started when Apple Music’s Beats1 released an interview on Thursday morning with Elton John, whose 70th birthday is […]

Elton Returning to to The Colosseum in Rome

As we fondly look back on the wonderful new memories created in Florence this year, we also look forward with excitement to our next adventure in Rome! The following pictures you see on this site will undoubtedly be an enjoyable reminder of our recent trip full of incredible venues and personalities. We are happy to […] 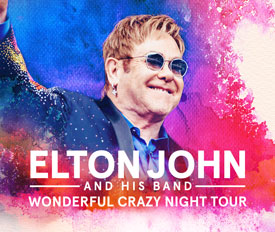 On Wednesday night, stars and philanthropists gathered at the Elton John AIDS Foundation’s 15th annual An Enduring Vision Benefit Gala in N.Y.C.’s Cipriani Wall Street to support a good cause, raise awareness for the disease, and of course, donate funds to the worthy foundation. The event, sponsored by Clase Azul Tequila and Chopin Vodka, raised […]

Caesars Palace and AEG Live have just announced four special dates in December 2016 and January 2017 for Elton’s Million Dollar Piano show in Las Vegas. Elton and the band (Davey Johnstone on guitar, Matt Bissonette on bass, John Mahon on percussion, Nigel Olsson on drums, and Kim Bullard on keyboards, with a special appearance […]

Sam Zell threw himself a birthday bash tonight (Oct 1), and Elton John turned up to rock the crowd. Zell, the Equity Group Investments chairman, turned 75 Sept. 28. This year the party was held at Cinespace Studios on the Near West Side. Among the chefs providing fare for the partiers was Erling Wu-Bower of […]

Today (May 5), we hope you will join all of us in wishing a very happy birthday to two members of the Elton John Band: guitarist and Music Director Davey Johnstone and keyboard player Kim Bullard. Davey and Kim are both at home in southern California preparing to go out on Elton’s next tour, which […]