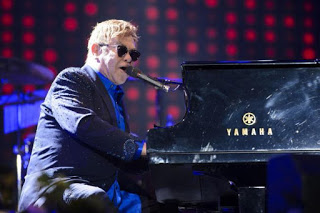 ELTON John has wished Airdrie FC good luck for next season as he gears up for his gig at the Excelsior Stadium.

The Tiny Dancer singer will be following in the footsteps of his late friend Justin Fashanu when he plays at Airdrie.

He died in May 1998 and Sir Elton said it will be a poignant evening for him as he thinks of his friend.

Sir Elton said: “It will be the first time I have performed at Airdrie’s Excelsior Stadium, the home of Airdrieonians FC, a club where my friend Justin Fashanu once played.

“He was a man of extreme courage and his death was a huge loss to all.

“He will of course be in my thoughts as I play in the town where he once worked. As you all know I love my football – music aside it is one of my great passions, and I wish Airdrie FC every success next season and beyond.”

Sir Elton is a football fan and as chairman of Watford Football Club he led his team out on to Wembley for the 1984 FA Cup final against Everton.

He will play the Excelsior Stadium on June 24 despite having suffered a “potentially deadly” bacterial infection during a recent tour of South Africa.

The 70-year-old said: “I look forward to returning to Scotland where you can always feel the passion of the fans.

“I am no stranger to playing in Scotland, of course, but this is the first time I will play in Airdrie and I look forward to playing songs from the latest album and of course playing all the fan favourites for a new audience.

“Thanks for all your support so far, see you at the Excelsior in late June.”