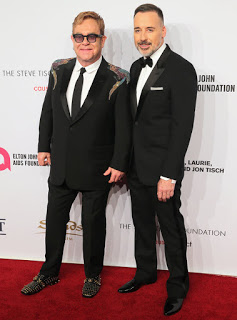 On Wednesday night, stars and philanthropists gathered at the Elton John AIDS Foundation’s 15th annual An Enduring Vision Benefit Gala in N.Y.C.’s Cipriani Wall Street to support a good cause, raise awareness for the disease, and of course, donate funds to the worthy foundation.

InStyle caught up with Sir Elton John himself, clad in a custom Gucci suit and Bulgari jewelry, who told us about how he started the foundation 25 years ago. “I lost so many friends in the early days. So when I got sober I thought, I’ve got to give something back,” he said. “We formed the foundation the year after I got sober … We started off at a little kitchen table, two people in Atlanta and one person in Los Angeles. We’ve kept it small, lean, and mean so that the money gets to the people who need it.”

“Always try and give something back,” he said of the best way to get involved in any charity organization. “No matter whether it’s money, the best thing you can give is your time.”

Jeffrey Tambor of Transparent also made an appearance at the event after asking John and his husband David Furnish how he could get involved in the foundation a year ago. “When I first started out in New York, the AIDS epidemic, was unknown … a lot of my friends in the theater, a lot of my actor friends were dying,” he said of why the cause means so much to him. “My take on this whole is that people think, ‘Oh I thought AIDS was cured,’ it’s not cured,” he added. “They’re still doing research, and … it takes money” to get the research to where it needs to be.

Later that night, the gala honored Frank Giustra, Steve Tisch, and UN General-Secretary Ban Ki-moon for their incredible philanthropic efforts to raise awareness and raise money for the cause. The event was also sponsored by Clase Azul Tequila and Chopin Vodka.

Ahead of next week’s Presidential election, Sir Elton John has urged people to make sure that “love trumps hate”.

The music legend made the comments at the Elton John AIDS Foundation’s 15th annual An Enduring Vision gala in New York this week.

Speaking about the Foundation’s work, he said: “We’re not gonna let up because we have an enduring vision — a vision of a more compassionate world, where no one is ever treated as less than, no matter their race, their sexuality or their gender.

“A world where love trumps hate. I knew I’d get the word ‘trump’ in somewhere.”

He added: “We’re not gonna let up because we have an enduring vision — a vision of a more compassionate world, where no one is ever treated as less than, no matter their race, their sexuality or their gender,” he said in his speech. “A world where love trumps hate. I knew I’d get the word ‘trump’ in somewhere.”

He said: “We can get there… if my 20-year-old self could see me talking about these issues, he would have been very surprised.

But I am happy to say I found my voice. And every day more and more people are finding theirs.”