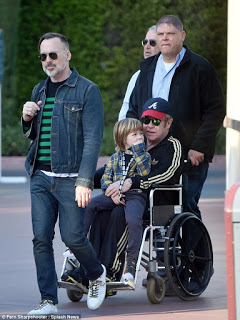 Sir Elton John’s Representative Has Assured Fans The Rock Veteran Is “On The Mend” After Hurting His Ankle Prior To A Family Trip To Disneyland.

The Rocket Man star sparked concerns for his health on Wednesday (23Dec15) after he was photographed being pushed around the theme park in Anaheim, California in a wheelchair.

In the snaps, the singer was seen with his son Zachary on his lap, while his husband David Furnish and their second child, Elijah, followed behind.

Sir Elton documented the Disneyland outing in a series of photos posted on Instagram.com, including one shot of the 68 year old standing with his arm around Zachary, and others of the family of four enjoying a number of small rides.

He made no mention of his need for the wheelchair on social media, but now his spokesman Murray Chalmers has played down the incident.

“It’s nothing serious,” he tells WENN. “Elton hurt his ankle but didn’t want to disappoint his kids by cancelling the trip to Disneyland. He is on the mend.”

No further details about how Elton sustained the injury have been revealed.

The Disneyland visit appeared to be an early birthday celebration for Zachary, who turns five on Christmas Day (25Dec15), while Elijah celebrates his third birthday on 11 January (16).