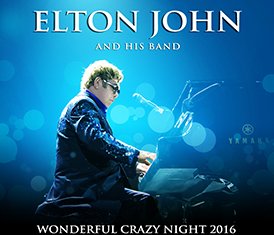 Elton and the band will play the Festivale Pause Guitare in Albi, France on Sunday, July 10.

Tickets for Elton at the Festivale Pause Guitare are on sale now at the Gérard Drout Productions website.

Elton and the band will play the Mobile Civic Center in Mobile AL, on Tuesdey, March 15, as part of a nine-city concert tour of the US.

An additional show has been announced for the Sverresborg Arena in Trondheim, Norway on July 2, 2016.