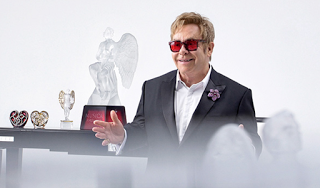 We are thrilled to announce an exciting partnership with Lalique, one of the world’s best-known manufacturers of crystal, and with Paddle8, the premier online auction house, to create ELTON JOHN MUSIC IS LOVE FOR LALIQUE, a collection of seven exceptional crystal sculptures, four of which will be auctioned and sold to raise critical funds to fight the HIV/AIDS epidemic.

“For me, this partnership with Lalique clearly demonstrates the company’s deep commitment to its role as a global corporate citizen,” said Elton John, founder of the Elton John AIDS Foundation. “We are proud to partner with Lalique and Paddle8 to raise funds that will support important projects in the fight against AIDS in the Americas and in the Caribbean.”

Three pieces from the MUSIC IS LOVE collection will be available for purchase starting September 10, 2015, at LALIQUE boutiques nationwide and select Neiman Marcus stores. 10% of proceeds from the in-store sales will benefit the Elton John AIDS Foundation.

The masterpiece of the collection, together with three additional unique special crystal sculptures, will be auctioned off by Paddle8 at the Elton John AIDS Foundation’s annual Academy Awards Viewing Party on February 28, 2016. The masterpieces will be available online in the weeks leading up to the live auction and accessible via Paddle8.com. All proceeds from the auction will benefit the Elton John AIDS Foundation.

You’ll be able to bid on the masterpiece and on the “standing Angel” and the two “Heart” sculptures in early 2016.