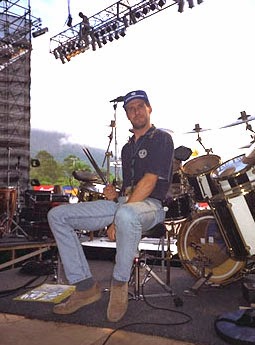 The Civil Police of São Paulo investigate possible crimes committed by a man of 54 years, a resident of Pirituba, in the West Zone, posing as English musician in the city. José Eduardo Carrara, 54, sought the Bureau of the Metropolitan Police (Delpom) on the morning of March 17 saying that Charlie Morgan, former drummer of Elton John.

Speaking in English, the boy said he had been robbed victim at the station Palmeiras-Barra Funda Metro.

According to the representative delegate Delpom, Cicero Simon da Costa, the report was initially considered true by police who recorded the event – although, according to the delegate, in testimony, the alleged drummer has claimed to be the son of singer-songwriter Alice Cooper and Reginald Kenneth John – Elton John record name.

In the report, the then Charlie account that two armed men motorcycle chased and assaulted him in front of the station. The thieves would have taken a watch of the Rolex brand, the amount of 8000 pounds and the passport of the supposed star.

“At first [the story] seemed real. He came speaking in English, but the call itself, the police officers who speak the language wary of his version. Did not beat the drummer of a famous singer would be with all this amount, carrying a Rolex, taking the Metro, “said the delegate.

Costa also reveals police triggered the British Embassy, ​​the British consulate and the Federal Police to see if the musician had actually entered the country. Hours later, the researchers found three other police reports, recorded in May, June and November 2014, on behalf of Charlie Morgan.

One of the oldest occurrences was theft, robbery and another in the third, the forger was said to have been threatened by a South African in the capital center. “The only thing that did not beat was the date of birth. There were three different records: 1960, 1970 and 1975 and the addresses he gave were fictitious England “.

The small explains that in one of the reports, however, there was an indication of an address at Lapa region. Police went to the site and found that it was the residence of Carrara’s brother.

The relative confirmed to police that Carrara had problems, and reported that the false musician lived in Pirituba. “In his house, his wife and son spoke he lived on site, but he disappeared, gave a lost and used this English name.”

To be able to find Carrara, police armed ambush last Friday (20). “We got his cell phone and spent by the music business. We asked if he could attend the opening of an event. He accepted and agreed the address. It came hours after the goal, but we can get it. ”

At the police station, according to Costa, Carrara said if passed drummer, and created assault situations to attract media.

He was indicted for the crime of forgery and false reporting of crime. The police now investigating whether the boy would also committed embezzlement, since he revealed perform at schools and events as a drummer.