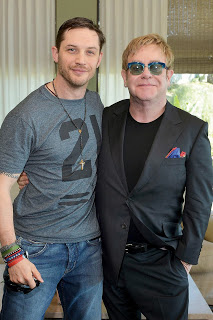 In preparation for playing the ’70s rock icon in the biopic “Rocketman,” the actor tells THR he’s been trying on Elton’s old clothing — he’s especially a fan of track suits.

Turning up in early November at the American Film Market to tout the project, Hardy — accompanied by John — revealed he’s been wearing the pop icon’s actual clothes to get into the mood (he especially likes John’s iconic tracksuits). Hardy even asked to borrow John’s watch.

“The two met up after Cannes in May and really hit it off,” says Joe Drake, whose company Good Universe is selling Rocketman (due to shoot in fall 2014) internationally.