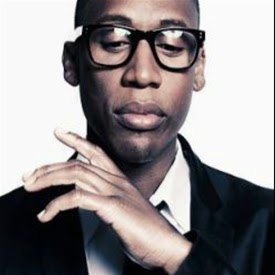 Raphael Saadiq, who started his career in 1986 playing bass in Sheila E.’s band during Prince’s Parade Tour, has been keeping busy over the past 25 years…first with the group Tony! Toni! Toné! and then a great deal of session work as well as his own highly acclaimed neo soul albums. In 2012, Raphael was invited to play bass on Elton’s new album, The Diving Board. Recently, Raphael spoke with EltonJohn.com.

EltonJohn.com: In your section of the Time magazine “Top 100 List of 2012”, Elton said that you have been on his radar since the first Tony! Toni! Toné! album in 1988 — at what point did you realize he was a fan?

Raphael Saadiq: When I did an album called Ray Ray [in 2004] somebody showed me an article and Elton said he was listening to some music that I did. That’s the first time I found out but when I actually met him he told me he had been listening to me even earlier than that.

RS: I wasn’t surprised what kind of music he liked, but yeah, when you hear Elton John likes your music you kind of go, “Woah! It’s Elton John.” I think Elton is a music connoisseur. He gravitates towards people who love music, so I think he genuinely liked my stuff.

EJ.com: To what extent were you aware of his music?

RS: I was aware of him as a kid. From the outfits to the glasses to the songs to the shows. I didn’t realize he was British. When I heard his music, I don’t know…you could hear his accent a little bit but I guess I wasn’t really thinking about it that much when I was a kid. So to me he just sounded like somebody who could play the piano like he played in a Baptist church or something.

RS: That’s exactly who he reminded me of — his piano playing. She plays piano really well. But I had never seen him live in concert. He invited me to come to Vegas and see The Red Piano. I knew the records so I know the piano solos that he plays…and he played them even better [in concert]. And I was just amazed at how much stuff was on his day-to-day calendar. He was doing shows, he was doing records, he was producing other stuff. And then he’d walk out and do a show every night.

EJ.com: The first time you actually played with him was at his Oscar Party in 2009, is that right?

RS: Yes. I’ve played with some pretty big people, you know? I’ve been around. But I’ll say…being able to play next to Elton John kinds of lets you know that everything’s not in vain. What you’ve done and what you’ve studied and the music that you love — it actually counts for something. If Elton John calls it’s like, you did something right. It’s a true validation. It’s honest and it’s innocent.

EJ.com: How were you invited to play on Elton’s record?

RS: [Elton’s manager] Johnny Barbis called me. He said, “Ray Ray…Elton wants you to come down and play on the album.” I was like, “When?” And the next thing you know we’re sitting at The Village with T Bone making a record. It was great for me, ‘cos I’m a bass player first before anything. Before a singer or anything. So it’s always great to go somewhere and just be a musician. Elton wrote the songs right in front of me. He had the lyrics; he’d write the songs and then we’d walk in the room and play it with him. We recorded everything together. Sometimes I’d grab the bass when he’s in there [writing] and I’d just be playing in my head on the bass a little bit. “What’s this kind of song deserve from me? What can I bring to it to add to what he’s doing and what the drummer’s doing?”

EJ.com: On at least half of the songs on the album you and drummer Jay Bellerose don’t come in right away. On a couple of tracks it’s almost a minute into the song. Were those discussions that you and Jay had, or was that dictated by the music?

RS: Elton and T Bone would kind of talk about that and they would ask questions of everybody. “What do you think?” Or sometimes we’d play the songs all the way down and maybe the next time around, “Let’s try this one where we don’t come in until the second verse…or the bridge.” But in the beginning we’d all just play. Then we would listen to a take and then maybe we’ll say, “Let’s take another take…maybe I’ll try this or I’ll try that.” And then everybody would try and pick what they were going to do next.

EJ.com: Some of these songs have different tones within their sections. How would you approach that?

RS: Well, the quality is already there; if Elton plays piano with nobody it already has a certain quality, you know? So my take was trying to play like if I was playing on a John Lennon record or on an early Beatles record. I like the way Paul McCartney plays. Like a skipping type of bass on a song — it would be my take on some blues that the Beatles might have played. Like, make it bounce a little more with Elton’s piano and with the swing of the drums. So it was a lot of minimal stuff…but it was all about Elton getting to the meat and potatoes of the way he used to record. So you had to keep that in mind too. It was like trying to have a kind of simplicity. But at the same time I wanted it to be tasteful.