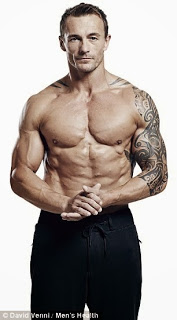 With his bulging biceps, abs of steel and clean-cut good looks, 34-year-old Peter Howe looks every inch the cover star.

The bodyguard, from Taunton in Somerset, is the winner of this year’s Men’s Health model search and saw off competition from five other muscly hopefuls to take the prize.

Peter, who is currently single, and, when he’s not in the gym, spends his days guarding celebrities such as Elton John and David Furnish, says that regular crossfit sessions are behind his spectacular six-pack.

His route to cover star success began when he left the army after suffering an ankle injury and being told he would never be fit for active service again.

After discovering crossfit, a regime that focuses on core strength and conditioning, he found the motivation he needed to stay fit and now owns his own crossfit facility in his home town.

‘I used to train for aesthetics; now I train for fitness and keep the younger lads in the gym on their toes,’ he reveals.

Although his regime is an impressively tough one, the fitness model admits that he does have a secret bad habit – a penchant for ice-cream.

‘I eat two litres of Ben & Jerry’s a week,’ says Peter, who adds: ‘Work hard and you can treat yourself.’

Among the men who lost out to Peter in the battle of the biceps were Jay Bailey, a chartered accountant from Birmingham, and Newcastle administrator, Justin Worthington.

Although Men’s Health readers voting online also appeared impressed with the muscles of runner’s up Mark Lee from Cardiff, Rhodri Fry from Aberavon and Robert Lake from London, none managed to get close to the eventual winner, Peter.

Speaking after the result was announced, Men’s Health Editor Toby Wiseman said: ‘Peter has tackled adversity head on and his dedication to his own health and fitness is an inspiration to all of us. If he can find the determination to succeed, so can we.

‘His training has left him fit and strong, as well as in excellent shape aesthetically. He personifies everything the Men’s Health man should be – a natural in front of the camera and a down-to-earth guy. The competition was very tough, but he is a more than worthy winner.’