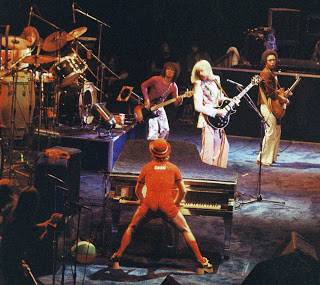 It is with a strong sense of sadness that we announce the passing of Roger Pope, who died on September 17 in Southampton, England.

Roger (“Popey” to his many friends) was the drummer for a number of internationally-known acts, but it was with Elton John that he is perhaps most closely associated.

Roger and Elton first got to know each other when they were both working at Dick James Studios in the late 1960s. Roger was the drummer on most, if not all, of Elton’s early demos recorded at those London facilities while he and Bernie were trying to get established as songwriters for the famed publisher.

When it came time for Elton to begin recording in earnest, Roger was the obvious choice to be behind the kit. Roger, as part of the band Hookfoot (which he had formed with bassist David Glover, guitarist Caleb Quaye and harmonica player Ian Duck) played on some of Elton’s pre-album singles as well as Elton’s first album, Empty Sky, some of Tumbleweed Connection in 1970, and 1971’s Madman Across The Water.

Hookfoot disbanded after releasing four albums and Roger soon found himself drumming for Kiki Dee, whose I’ve Got The Music In Me album was produced by Elton helmsman Gus Dudgeon. In 1974, Kiki was the opening act for Elton’s world tour, and soon enough Roger was asked to join Elton’s new band in 1975.

This line-up premiered at the Midsummer Music Festival in June of that year and immediately went on to record the album Rock Of The Westies at Caribou Ranch in Colorado. This was followed by more concerts, including a pair of landmark gigs at Dodger Stadium in Los Angeles and a week of shows at Madison Square Garden in 1976 (totaling 83 shows in just over one year’s time) and the recording of the double album Blue Moves in March, 1976.

In 1977, Roger continued to work with Elton band mates Davey Johnstone and James Newton Howard in the band China, which released their self-titled album on Elton’s Rocket Records. The following year, Roger reunited with Caleb, this time playing live dates with Hall and Oates and on their album Along The Red Ledge.

Overall, Roger played in excess of 84 concerts with Elton, as well as on over 43 studio songs and six albums.

Commenting on the loss of his friend and band-mate, Elton’s guitarist and Music Director, Davey Johnstone, said, “Roger was not only a swashbuckling-pirate type of a guy, he was a wonderful player. We got very close musically on the China album. I will miss him. RIP Popey.”

And another of Elton’s drummers, Charlie Morgan, paid tribute on his Facebook page: “Tonight we lost another icon of the drumming world. Roger Pope, drummer for Elton John and founder member of Hookfoot. Friend, colleague, sparring partner and HUGE influence on my early career. He was a technician of the first order, with uncanny feel & intuition.”

Roger Pope, 66, was survived by his long-time partner, Sue, whom he married shortly before his death.

Some of Roger Pope’s most distinguished tracks with Elton: