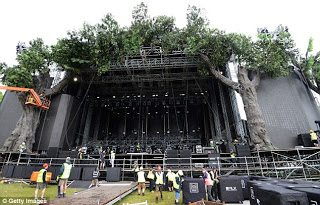 SIR Elton John yesterday revealed he has been struck down by an agonising bout of appendicitis that could have killed him.

The 66-year-old legend had to scrap his European tour — including a gig at London’s Hyde Park — after stomach pain forced him off stage on Friday. Scans showed a potentially-fatal appendix abscess.
Sir Elton told The Sun: “I’m lucky to be alive.”

Stricken Sir Elton risked his life by battling his way through concerts despite crippling stomach pain.
The veteran singer thought it was food poisoning — when in fact he had an appendix abscess.

Sir Elton told The Sun: “I was a ticking time bomb. I guess I could have died at any time.”

“I feel so lucky and so grateful to be alive. I played nine gigs and the White Tie and Tiara Summer Ball in agony.”

On Friday the pain finally became too much and he was forced to walk off stage halfway through his set in Halle, Germany.

Medical tests revealed the abscess and Sir Elton was given drugs to reduce his dangerously inflamed appendix, plus antibiotics to counter the risk of blood poisoning.

He was yesterday confined to bed at his Windsor home — and will need surgery once the swelling has reduced. A source said: “Elton is over the worst but is still very sick. It’s been a horrible ordeal.”

Sir Elton has cancelled the remaining summer dates of his European tour — including his headlining slot at Friday’s Barclaycard British Summertime Festival in Hyde Park.

The appendix is attached to a part of your body called the cecum, which is a sack generally considered to be the beginning of your lower intestine. We’re going to have to talk about pus and catheters and kind of gross infections.

But if you think you can handle it, keep reading.

Everyone’s appendix is attached to the cecum, but individual appendixes can point in different directions. Some people’s appendixes point down toward the pelvis, others point straight out. John’s appendix does something a bit unusual in that it makes a U-turn and winds up hiding behind the cecum itself. That’s why it’s called “retrocaecal,” explained Dr. Jerald Wishner, co-director of robotic and minimally invasive surgery at Northern Westchester Hospital in New York.

This is actually good news for the 66-year-old Sir Elton. Based on the limited information on the singer’s website, Dr. Wishner said, it’s likely that John was having some discomfort, but probably not the acute pain that we associate with most cases of appendicitis.

When his appendix ruptured, the infection did not move into the intestine lining like it would have if the appendix had been pointing down; instead, the infection brewed where the appendix was sandwiched between the back of his abdomen and the cecum, creating a collection of pus.

This is when the pain probably became more severe. Doctors can’t go in and remove the appendix with all that infection and inflammation around it, so they will give John a course of antibiotics to treat the infection and will insert a catheter in the abscess to drain it.

Wishner said in cases like this, the catheter is usually needed for as little as a day or up to a week, and that it usually takes four to six weeks to get the infection under control. Once the area around the appendix is healthy again, doctors will remove the appendix in a surgery that requires just three small incisions. Most patients are able to go home the same day.