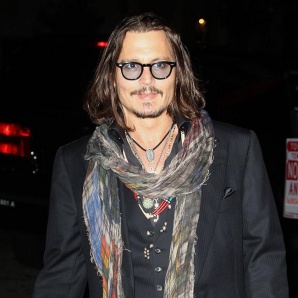 He famously arrived at his own 50th birthday bash dressed as Louis XIV – wearing a wig so big that he had to be transported to the party in the back of a van.

The Rocket Man singer pulled out all the stops to celebrate David’s birthday at the Belasco Theatre in Los Angeles – with A list star Victoria Beckham making a very late entrance away from the public eye after co-hosting a dinner in LA with her idol, US Vogue Editor Anna Wintour.

Chi Chi tweeted: ‘What a magical glamorous night! Happy Birthday David Furnish! Thank you EJ for asking me to celebrate with you and be your DJ!!’

Nikki, 23, boasted that it was going to be a ‘ravishing’ night at the party and then posted a picture of her posing with actor Neil Patrick Harris, who along with his partner David Burkta, is close friends with Elton and David.

Among the high-profile guests were Elizabeth Hurley, who arrived in the arm of her fiance Shane Warne, looking stunning in a full-length white gown.

Elton and David are godparents to Elizabeth’s 10-year-old son Damien and she stayed at their Windsor home after his birth away from the public eye.

And while the couple are godparents to the David and Victoria Beckham’s oldest son Brooklyn, 13, the Beckhams were not seen making a grand entrance on the red carpet.

Instead, Posh, 38, was hosting a private dinner with US Vogue Editor Anna Wintour for the Vogue Fashion Fund and the BFC, the British Fashion Council.

And a source said: ‘Victoria and David went on to Elton and David’s after the Vogue dinner had finished and they went in through a private entrance, so no-one saw them.

‘They got there in time for the speeches and partied until 3am – they had a great time!’
Intriguingly, Johnny Depp turned up – even though he has rarely been seen with Elton and David, apart from at a dinner in LA last year.

Looking bedraggled, the actor threw a scarf around his neck, teamed with strings of necklaces, while Gwen Stefani looked amazing, as she turned up in a tuxedo suit teamed with black bra and her signature red lipstick, on the arm of her husband Gavin Rossdale.

To mark his big day David and partner Elton John threw a typically extravagant party at the Belasco Theatre in Los Angeles for all their favourite celeb pals. And the guests were lucky enough to enjoy a special musical rendition from the Pirates of the Caribbean star who sang disco favourite, the YMCA, whilst reportedly wearing a drag costume.

Renowned chef Ludo Lefebvre is believed to have catered the meal, with Circque de Soleil providing some more entertainment.

The 23- year-old rapper and musician is believed to be back with Rihanna after recently dumping his girlfriend, model Karrueche Tran.

We’ve got Tonight singer Lulu arrived at the bash with music producer Nigel Lythgoe. The 63-year-old Scottish superstar looked fantastic in a pale pink dress with matching ruffled detailing over the top.

In a striking black number, bearing a a three dimensional black flower, comedienne Joan Rivers arrived with her daughter Melissa. Holding hands, the mother and daughter laughed and smiled as they made their way inside the theatre

It was the second birthday bash in a four-day event planned by Elton for David.
The couple entered into a civil partnership in December 2005 and have a one-year-old son called Zachary.

On Thursday night, Elton threw a party for 200 of their closest friends at their new $7.6 million Beverley Hills home, where the Gypsy Kings provided the entertainment.

Tonight will see David and his guests heading to the Greystone Manor nightclub where veteran singer Cher is expected to take to the stage for and exclusive performance.

And if that was not enough, tomorrow, guests will be driven 300 miles to Las Vegas, and given the best seats in town to see Elton’s Million Dollar Piano show at Caesars Palace, with a private after- party in the hotel to round off the epic celebrations.