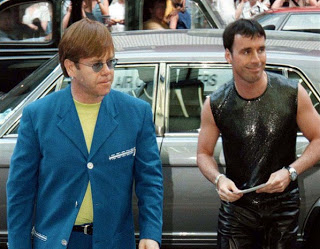 SIR ELTON JOHN is urging authorities to change gay marriage laws as he is desperate to refer to his partner DAVID FURNISH as his “husband”.

The singer exchanged vows with Furnish in a civil partnership ceremony in 2005, on the first day the law allowing homosexual unions was introduced.

However, the Rocket Man wants gay couples to be given equal rights as heterosexual unions, and insists he will be first in line to marry once it is permitted.

In a column for Britain’s Independent newspaper, Sir Elton writes, “If we legalise gay marriage in Britain, you can bet your last penny that I’ll be pushing to call him my husband at the first opportunity – though whether he or I go down on one knee is a matter for negotiation!

“I know a lot of people, and perhaps especially religious people, will say that David and I should count ourselves lucky for living in a country that allows civil partnerships, and call it quits there… Maybe we should just be happy that we at least have a civil partnership, and not push our luck.

“Well, I don’t accept this. I don’t accept it because there is a world of difference between calling someone your ‘partner’ and calling them your ‘husband’. ‘Partner’ is a word that should be preserved for people you play tennis with, or work alongside in business. It doesn’t come close to describing the love that I have for David, and he for me. In contrast, ‘husband’ does. Until the law recognises David Furnish is my husband, and not merely my partner, the law won’t describe the man I know and adore.”

The star is urging fans to sign a petition demanding change, as he believes an alteration in the law would encourage nation-wide tolerance.

He adds, “Wouldn’t it be a huge source of national pride if we… became one of the first countries in the world to say being married isn’t about whether you’re straight or gay, but about whether you’re human? I think it would. I think that, in this Olympic year, when the eyes of the world are upon us, we should show that we are country committed to the sacred institution of marriage, proud of our tolerant heritage, and brave enough to let lovers like David and I call each other a husband.”