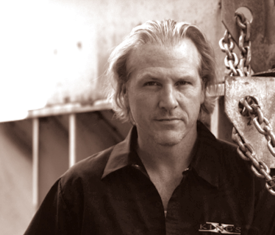 Matt Bissonette is confirmed as bass player and backing vocalist for the Elton John band, following the sudden death of Bob Birch. Matt is currently rehearsing in Los Angeles with the band, ahead of the North American tour which begins on September 11 at the Mississippi Coliseum, Jackson, Mississippi.

Matt Bissonette is a musician, writer and producer who was born into a musical family in Detroit, Michigan. His father was a drummer, his mother played piano and his brother, Gregg, is a drummer. Matt’s early career dreams embraced sport rather than music, but when he was twelve years old his parents bought him a bass guitar and, effectively, he’s been playing it ever since.

Despite this early success Matt’s mother insisted he learn how to read music and to play the trombone, a chore at the time but he is now extremely grateful to have those skills. Matt’s early live gigs included stints with The Kingston Trio and The Ink Spots, as well as playing the local Detroit scene, including a residency at the Detroit Lions football games.

In 1979 Matt attended North Texas State University, but two years later he left college to join Maynard Ferguson’s band and tour the world. Later moving to Los Angeles, Matt had the distinction of playing five sets a day in the Disneyland Band in Anaheim, a gig he describes as one of the best he ever had.

In Los Angeles Matt’s musical career took off. He played every night in clubs, joined bands, and went on the road with wide range of artists including Gino Vanelli, Sheena Easton, A-HA, Christopher Cross, Brian Wilson and The Captain and Tenille. In 1988 Matt and his brother Gregg joined David Lee Roth’s band and spent the next two years touring the world and recording, followed by a similar stint with Joe Satriani’s band.

In the early 1990s Matt and Greg formed their own band, The Mustard Seeds, which has stayed together in various forms ever since. Matt is also a published songwriter, and he continues to record and produce other artists.

Matt had known Davey Johnstone, Elton’s Musical Director,for many years, and following the tragic death of Bob Birch, Davey invited Matt to join Elton’s band. Matt had also known Bob very well, and he is keenly aware of the sensitivities involved. He says: “You can never take a guy like Bob Birch’s place in a band. I would love to honor Bob on this Elton tour and while playing all these great songs remember how great he was, as a bass player and all-round musician. But it’s ten times more important to remember what a fantastic human he was, and is. Here’s to you Bob.”