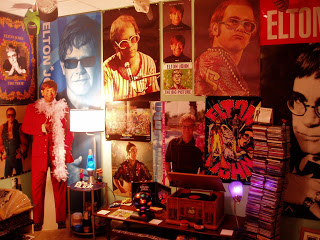 She donned the Elton John sunglasses she’d won for $1,000 in a Sotheby’s auction, checked them out in her Accord’s rearview mirror and smiled.

That happened in 1988. In the Hoover post office parking lot. It was the day Lynn Kurtts picked up the package in which Sotheby’s, the famous British auction house, had shipped her the diagonally striped shades, which can be seen on the cover of John’s album “Reg Strikes Back.”

You can bet Kurtts will be smiling again Wednesday night during Sir Elton’s Huntsville show at the Von Braun Center. It will be the 53rd concert Kurtts has seen by the singer/songwriter, known for piano-driven pop smashes, such as “Your Song,” “I Guess That’s Why They Call It The Blues” and “Goodbye Yellow Brick Road.”

“The first time I saw him was in Tuscaloosa on July 18, 1976,” Kurtts says. “I became a fan of his because of a song called ‘Pinky,’ which was not a radio hit … It has a sweet, sweet melody that made my mouth sling open at age 14.”

Since Kurtts is in John’s fan club, her tickets are guaranteed to be within the first 10 rows. But obviously, Kurtts has whizzed past fan status and into superfan stratosphere.

The Sotheby’s sunglasses are the showpiece in her “Elton Room.” The room, located in the five-bedroom Birmingham home she and husband Rob Kurtts share, contains a collection of memorabilia worthy of a Rock and Roll Hall of Fame exhibit. There are two copies of every album Elton John has ever released – one copy still sealed and one opened. There are Elton dolls that sing “Crocodile Rock.” Coffee mugs emblazoned with the superstar’s visage, his red piano and the title of his 1974 rocker “The Bitch Is Back.” Tour patches. And enough concert T-shirts to start a cottage industry.

Elton John souvenir caps hang from the ceiling, and the walls are absolutely plastered with posters. Posters of a glammed-out Elton. Posters depicting Elton with hair, little hair and a latter-day follicle comeback. A live shot from his legendary 1975 Dodgers Stadium shows.

“Back in the ’70s, when (Elton) could do no wrong, he was very marketed,” Lynn says, “and there was always lots of memorabilia for him. As I collected things at concerts, he continued to be on the Top 40 charts and have number one songs, so therefore the collection has grown.”

She estimates she spends an average of $150 to $250 on concert merch during each Elton tour, which she typically sees in multiple cities.

Lynn put together the Elton Room in a single day three summers ago, after her daughter Jennifer had moved out and into her own apartment. When Rob left for work that day, the space was still a bedroom. But when he returned home in the evening, to his surprise, there was an Elton Room in his house.

“My first reaction was, ‘Look at all the holes in the wall,’ because it was wall-to-wall posters,” Rob laughs. “But honestly, I wasn’t that surprised. Lynn is very passionate about Elton – has been since she was young – and as we got to know each other, she kind of introduced me to it. We started going to shows together, and I saw what an amazing entertainer he is.”

The Kurtts home also houses a “man cave,” which is decorated with Rob’s impressive array of NASCAR caps. Which brings up another point: Just as Rob is supportive of Lynn’s Elton fandom, she embraced his NASCAR jones, and regularly attends races, such as the Talladega 500, with her hubby. The Kurttses, who met through a common interest in bird watching, married about four years ago. He’s a hardware store department manager, while she works at an outdoor accessory retailer.

Before Lynn manifested the Elton Room, her collection was stored in plastic tubs in the basement. The Sotheby’s sunglasses – which Lynn paid for with money she’d saved and dollars family had given her as birthday gifts – are housed in a display box. The wall-mountain box also exhibits a photo, snapped backstage at a 1992 Nashville show, of Kurtts and John sharing a hug as the singer wears the shades Kurtts now owns.

Elton John even figured into the Kurtts’ belated honeymoon.

They bought tickets to the second show in a series of his Las Vegas concerts. Upon arriving early in Sin City, the couple were perusing the Elton John store Caesar’s Palace had installed, when they overheard fans saying choice tickets had just been released for that night’s show. Sure enough, the Kurttses acquired second-row seats.

But Rob admits he was “not prepared to go.”

“I was wearing shorts, a Lynyrd Skynyrd hat and a NASCAR hat.”

At the ensuing gig, John allowed the first few rows to jump onstage during a performance of the rollicking 1973 smash, “Saturday Night’s Alright for Fighting.” “We ended up around his piano,” Rob says. “And from the look on his face, he seemed pretty surprised to see a guy that looks like me – a large guy with a beard – and he kind of kept his eyes on me. And kept looking back at his security. He probably thought I was some NASCAR redneck.”

Another Elton Room talisman is a scrapbook Lynn has curated since the mid-’70s. The thing is about a foot thick now, with every clipping she’s been able to scavenge, from Rolling Stone and other assorted publications, glued onto its pages. When she met John in 1992, she showed him the scrapbook and he autographed it.

“He sat it down on the floor and squatted down to look at it, and he seemed amazed,” Lynn says, describing John as being “very gracious” in person. “Some of his band members came around and started looking at it, and said it was like going back in time.”

While Lynn obtains most of her John memorabilia at concerts, she’s also purchased an item from eBay, including one of those aforementioned dolls. And over the past four decades, she’s bonded with other Elton enthusiasts by waiting in line for tickets, visiting a message board called “The Crazy Water Community” and, what else, Facebook.

On Wednesday, Lynn and Rob plan on arriving in Huntsville about noon. They’ll pick up the fan club tickets, check into their room at the Holiday Inn and chill. When it’s time to go to the show, they’ll don the outlandish, “Rocket Man”-style sunglasses and boas they wear to Elton John concerts, and head to the Von Braun Center. Sir Elton will pound his piano and sing from the heart.