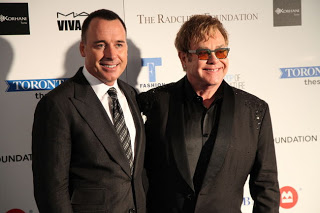 SIR Elton John likes to make an impact on his party guests — and half-naked waiters are bound to go down a treat.

The British singer posed with partner David Furnish and seven scantily-clad beefcakes at his latest fundraising event in Toronto, Canada.

The hired helps left little to the imagination with pants and tiny aprons — but they stuck to the dress code with dickie bows.

Elton and David were more conservatively dressed at the Fashion Cares: A Night of Glitter & Light at the Sony Centre For Performing Arts.

The event featured a live performance from Elton plus a fashion show featuring “actively outrageous” fashions of the past 25 years.

For the last edition of this annual fundraiser, they went big with a concert featuring The Scissor Sisters and Janelle Monae. They kept The Rocket Man for the end. Wearing a jacket with the initials “EJ” glittered on his back, he set the room on fire with songs like Your Song and Tiny Dancer.

His performance was even more impressive giving his vocal condition. “I lost my voice last night,” he warned the crowd as he took his throne behind his grand piano.

He must have great doctors — I couldn’t tell if he was sick or not.

Earlier in the evening, he made a quick (and silent) stop on the red carpet for pictures. “He needs to rest his voice,” said his husband David Furnish, by his side. Too bad for reporters who waited an hour to chat with the legend…