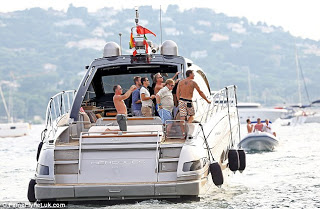 He recently admitted becoming a father to baby son Zachary has changed his life for good.

But Sir Elton John proved he certainly still knows how to let his hair down as he took a break from juggling work and parenting to party with a group of pals in the South of France.

The 65-year-old singer and his partner David Furnish were flanked by a huge male entourage as they stepped out in St Tropez.

And the group certainly seemed in high spirits as they soaked up the sun on the French Riviera.

Wearing a pair of casual blue shorts, a loose-fitting shirt and his trademark sunglasses, the music legend looked happy and relaxed as he treated his brigade of handsome companions to a spot of shopping.
Earlier in the day, the group had enjoyed some time on board Sir Elton’s yacht.
Showing off his cheeky side, the Rocket Man hitmaker pulled down his shorts to reveal his ample derriere – much to the amusement of his friends

According to onlookers, the musician was showing off his white bits to a passing yacht which was reportedly hosting actor Sir Michael Caine.

Elton seemed more then impressed with his naughty antics, and was grinning from ear to ear as his pals egged him on.