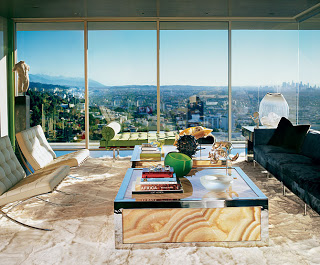 Rock icon Elton John and his partner, David Furnish, have listed their two condominiums in West Hollywood for sale, according to the Multiple Listing Service.

The Sierra Towers units, which have city and ocean views, could be combined. The building has 24-hour security, a doorman, an outdoor pool and a gym.

The pair recently bought a contemporary house in Beverly Hills that had been listed at $7.695 million but was withdrawn from the market before closing. It can be weeks or months before a sales price appears on the public record.

John, 65, has won multiple Grammy Awards. He shares an Oscar for “The Lion King” song “Can You Feel the Love Tonight” and won a Grammy for singing it. Furnish, 49, directed “Elton John: Tantrums & Tiaras” (1997). He was an announcer and executive producer of the television series “Spectacle: Elvis Costello With …” (2008-11).