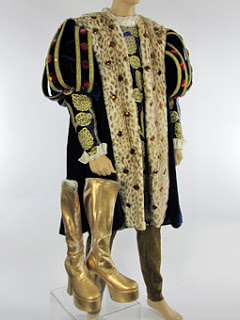 Here’s your chance to own a piece of Super-Rock N’ Roll-Bowl history! The costume up for auction was worn by Sir Elton John for Pepsi’s 2012 Super Bowl commercial, King’s Court, which aired on Feb. 5, 2012 during Super Bowl XLVI!

The custom-made costume is as magnificent as the commercial and includes a jewel encrusted and faux fur accented cape fit for a King, a ruffled velour shirt, gold tights, and 5” high-heeled gold boots, all donned by Sir Elton.

The “King’s Court” commercial was shot in Los Angeles over a 3-day period and included over 200 cast members, including X Factor winner, Melanie Amaro, who premiered her first single, “Respect.”

This one-of-a-kind item is a true collectible and here’s your chance to own a King’s wardrobe worn by a musical legend!