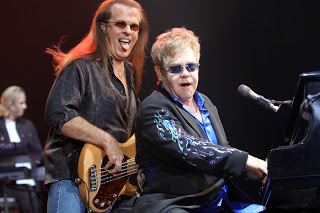 The last time Elton John played in Tampa, it was a sold-out gig in 2009 with Billy Joel.
So far, the closest he is coming on his current tour is Orlando in March, when Sir Elton will perform at the Amway Center in what’s being billed as a “greatest hits” set. No new material! (Although to be honest, we wouldn’t mind a couple of songs from John and Russell’s The Union .) He does have a few open dates around then, though, so we’ll hold out hope that a Tampa show might still be in the works. Tickets to the March 10 show will go on sale Jan. 21, and will cost $32, $82 and $137.

Music legend, Elton John is coming to Poland to give two concerts. He will play at the Ergo Arena in Gdansk on July 8, and the day before at Atlas Arena in Lodz.
Elton John last visited Poland in May 2010, with the concert at Polonia stadium in Warsaw.

John last performed at the arena in 2007. His career spans five decades. He’s one of the top-selling solo artists of all time: 35 gold and 25 platinum albums, 29 consecutive Top 40 hits and more than 250 million records worldwide, according to the arena.

Tickets are available through ticketmaster.com and all Ticketmaster outlets. For more information, call 948-7825.

Elton John will perform hits from a career that spans five decades in a concert March 6 at James Brown Arena, the Augusta Entertainment Complex announced Thursday.

This won’t be his first visit to Augusta.

“We are thrilled to announce that after more than 13 years, the incomparable Elton John will once again grace the stage in Augusta, Ga., at the James Brown Arena,” Monty Jones Jr. said in a statement. Jones is the local general manager for Global Spectrum, which manages the arena for the Augusta-Richmond County Coliseum Authority.