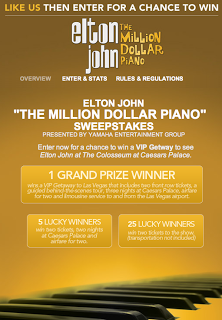 How long have you been working with Elton John?

Yamaha’s been working with Elton since 1993. I’ve been collaborating with him since the Red Piano Tour. When that was wrapping up, we started talking about the Million Dollar Piano.

And is that figure pretty accurate—a million dollars?

The exact figure is $1.4 million. We originally priced the piano at under a million. But remember, our pianos take years to produce and we make them by hand in Japan, so we didn’t want to price out the LED screens before we’d completed the piano. We realized there would be advances in LED technology by the time we were finished. And by the time we added all the electronics, we were looking at $1.4 million.

Bells and whistles aside, what does Elton look for in a piano?

Elton is an exceedingly hard player. He plays really, really hard. Especially with his left hand. He used to play so hard that his hands would bleed. So we modify and strengthen the hammers for him. And the action is really light. We file the keys a certain way. He’s got a signature sound that’s developed over time. It comes from the acoustic properties of the instrument, but also the off-stage tone generators. So his “signature sound” is actually the combination of a lot of sounds put together.

Who else plays as hard as Elton?

The only other guy is Billy Joel.