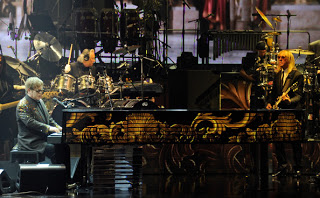 The five-time Grammy winner, Elton John has returned to Las Vegas for a three-year headlining gig at Caesars Palace. He performed for the first of 16 shows scheduled through October, on Wednesday.

John took stage in a dazzling, sequined cape and garnered standing ovations from parts of the crowd after each song. John spent about 2 hours going through hit after hit from his lengthy catalogue — though he skipped his top hit, “Candle in the Wind.”

The remainder of John’s shows during the three-year run have not yet been announced. 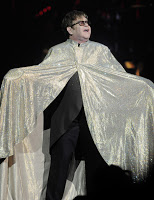 John says the show is named for his new piano, which took manufacturer Yamaha four years to build. He said the grand piano, black with a video screen on its side, is named Blossom, after jazz singer Blossom Dearie.
“It has a spin cycle washer in the back, a microwave and an aquarium,” he said. The only thing it’s missing: “A barbecue,” John quipped.

Elton John’s return comes more than two years after that five-year stint that ended in 2009. The run was originally planned for three years but was extended because of demand. 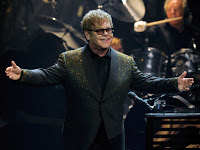 “This isn’t like the old days,” John said of the new show. “It’s going to be certainly different from anything you’ve seen from me before, as was ‘The Red Piano,’” his previous show at Caesars.
“The Red Piano” included risque imagery — with high-tech videos and large, inflatable props — plus the hits John has become known for during a career that’s spanned more than 40 years.
Jason Gastwirth, senior vice president of entertainment for casino owner Caesars Entertainment Corp believes John’s run could be extended again.
“I think it’s very possible, both on duration and number of shows,” Gastwirth said. “There’s been such a large appetite by his fans to come see the show.”
John is one of music’s most decorated stars, known for songs including “Candle in the Wind,” ”Rocket Man” and “Bennie and the Jets.” He was knighted by Queen Elizabeth II in 1998, inducted into the Rock and Roll Hall of Fame in 1999 and honored by the Kennedy Center in 2004 for his lifetime contributions to performing arts.

John won an Academy Award in 1994 for his original song, “Can You Feel the Love Tonight,” from Disney’s “The Lion King.”
– AP
SETLIST
The Bitch Is Back
Bennie And The Jets
Rocket Man
Levon