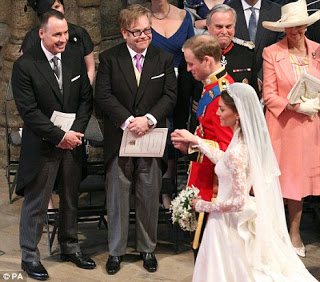 PRINCE William and his new bride Kate had their first dance to a cover of Elton John’s Your Song at a raucous evening wedding party at Buckingham Palace, newspapers reported on Sunday.
The newlyweds took to the floor to dance to a live performance of the song – a favourite of William’s late mother Diana – by British pop starlet Ellie Goulding, according to the News of the World and the Sunday Mirror.
But William reportedly broke off the dance after just 30 seconds to demand that the DJ switch to something faster paced.
After the carefully choreographed splendour of the wedding day, 300 guests of the couple let their hair down at the party which also featured a best man’s speech from William’s brother Prince Harry.
Harry, 26, teased his 28-year-old brother ceaselessly about his thinning hairline and mocked the newlyweds’ official titles of the Duke and Duchess of Cambridge by calling them the ‘dude and the duchess’, the reports said.
He also moved Kate to tears by saying he loved having a sister at last and was so happy at how close they had become, according to the News of the World, which quoted an ‘insider’.