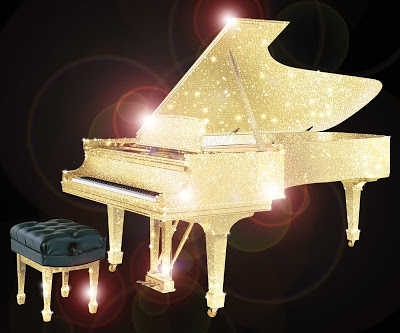 (It’s) not like the old days — different from anything you’ve seen before. I will really raise the bar. It’s a fabulous piano. It will surprise a lot of people. … I want people to leave with real emotional feelings, that they have been close to me, had fun, definitely laughed, maybe cried — an intimate evening with me that they’ve never had or seen before. It will give me a way to get much closer to my fans.”

He said some audience members will be permitted to leave their seats and join him onstage to sing and dance with him while he is at the megabucks piano. “I love that. I love that connection. I’ve never enjoyed playing live more than I have now.”

“We couldn’t be more excited to once again welcome one of the world’s most beloved entertainers, Elton John, to The Colosseum,” said Gary Selesner, Caesars Palace president. “During his last residency, Elton and his talented band brought so many memorable performances to Caesars Palace. We are looking forward to more incredible moments with Elton onstage at The Colosseum and continuing our successful partnership.”

The British-born global superstar completed a highly successful five-year residency at Caesars Palace in April 2009 with the critically acclaimed The Red Piano. Originally booked for 75 shows in a three-year run, audience demand was so overwhelming that the engagement was extended to 241 shows in five years.

Elton will be accompanied by his band, which includes Davey Johnstone on guitar, Bob Birch on bass, John Mahon on percussion, Nigel Olsson on drums and Kim Bullard on keyboards, with a special appearance by percussionist Ray Cooper.

“Caesars Palace is just a perfect, idyllic place to play, and the show will be a gargantuan feast of music and imagery,” said Elton. “I’m going to have a fabulous piano that Yamaha has been working on for four years, and that’s the reason why the show is called ‘The Million Dollar Piano.'”

Elton will be accompanied by his band, which includes Davey Johnstone on guitar, Bob Birch on bass, John Mahon on percussion, Nigel Olsson on drums and Kim Bullard on keyboards with a special appearance by percussionist Ray Cooper.

One of the most successful live acts on the road today, Elton and his band put on an unforgettable show: the entire audience standing, dancing and singing along with much-loved classic songs.

The monumental career of international singer, songwriter and performer Elton John has spanned more than five decades. He is one of the top-selling solo artists of all time, with 35 gold and 25 platinum albums, 29 consecutive Top 40 hits and has sold more than 250-million records worldwide. Elton holds the record for the biggest selling single of all time, “Candle in the Wind,” which sold 37-million copies. Since his career began in 1969, he has played almost 3,000 concerts worldwide.