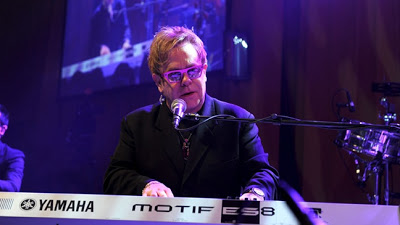 Sir Elton will also perform with Leon Russell as the show’s musical guest, marking his first time back on the ‘SNL’ stage since 1982.

Sir Elton John will play double duty on April 2 when he hosts Saturday Night Live and appears as the show’s musical guest with Leon Russell. It will be his first time back on the SNL stage since 1982, when he performed the songs “Empty Garden” and “Ball And Chain.”

The booking was revealed at John’s annual Oscar viewing party, held Sunday night at the Pacific Design Center. The swank bash included a live auction to benefit the Elton John Aids Foundation. Among the items offered was VIP access for two to SNL’s April 2 show and cast after-party, courtesy of Lorne Michaels. The winning bid came in at $75,000.