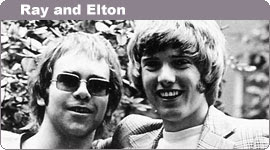 In her recent book, “Being Wrong”, Kathryn Schulz describes an experiment in which actors stage a row before an unwitting crowd. It ends with one firing a gun and another falling to the ground. When witnesses are asked what happened, they get details wrong, imagine dialogue or blood and report things that didn’t happen. Memory is fickle – we often forget or just get it wrong, which is one reason why you should date and time stamp your ideas.

So maybe it’s Elton John’s hazy recollection of how he met Bernie Taupin 40 years ago that prompted him to say in a recent interview for Rolling Stone magazine: “The story of how we met is so ridiculous in the first place. I went to Liberty Records while I was still in Bluesology and said, ‘I may be able to sing, I may be able to write, but I can’t write lyrics,’ and a guy hands me a big brown envelope that hadn’t been opened and says, ‘Take these, they’re from some guy in Lancashire’.”

That doesn’t tally with Ray Williams’ memory. He was the guy at Liberty Records. He put an ad in NME to which Elton and Bernie responded. Ray met Elton and arranged for him to record some demos. He read Bernie’s lyrics and identified a potential partnership so introduced the pair. And, to be strictly accurate Bernie was from Lincolnshire not Lancashire!

It was 1967 and Ray was 20 years old. According to him he did more than just introduce Elton to Bernie. He wanted to sign him as a recording artist, but his Liberty bosses didn’t like Elton’s voice. So, at Elton’s request Ray became his personal manager. He signed a co-management deal with Dick James entitling him to half the management commission.

In 1970, after the Troubadour gigs that Ray set up for Elton, Dick James unceremoniously terminated Ray’s contract. With no money for lawyers and a new baby girl to look after called “Amoreena” – no coincidence there’s a song of the same name – Ray was forced to accept less than £1,000 for his role in launching Elton John’s career. He has never received a penny since.

You may empathise with Ray’s predicament. In fact, you may have your own similar stories and I’d be keen to hear from you, if you have, but it’s a story laden with irony and some sadness on a number of levels.

Elton and Bernie’s song-writing partnership is so etched on the last 44 years of pop repertoire it feels like a historical inevitability, but in fact it’s very unlikely they’d have met if Ray hadn’t put them together. He recognised their talent, had a great idea, he put it in motion and, in so doing, he fulfilled the classic music publisher A&R; role initiating a creative partnership that would produce some of the most successful and valuable copyrights; quickly too – Your Song was written within a couple of years. But he didn’t protect himself first.

He then embarked on the toughest part of any artist manager’s career – the bit at the start when you try to convince people to take your artist seriously. The phase when it’s a struggle to get the gigs and TV appearances and when you really have to work to persuade anyone to say “Yes!” to your act. It’s a long time ago in Elton’s case, but that was Ray’s part in his career.

I know this to be true as, having worked with Ray on and off over the last 20 years, I’ve heard people like Bill Martin (co-writer of Sandie Shaw’s “Puppet On A String”) come up to Ray and say, “I know you. You’re the guy that always bloody pestered us about that young pianist with glasses called Elton John that you said was going to be the next big thing. Well, you were right! I hope you did alright out of that!?”

That’s when Ray mutters or laughs. How can you launch the career of one of the most successful recording artists and create one of the most lucrative song-writing partnerships in pop history and feel any sense of pride if you come out of it with nothing?

But he was in his early 20s. Like many people with the best insights and ideas, Ray was young and inexperienced. He wasn’t savvy. He couldn’t know that by the time he was 23 he would have just enjoyed a uniquely successful role he could never hope to repeat in his life. The last 44 years are testament to the fact there could never be another opportunity in his career that would come close to being so significant for him. It’s like the Winklevosses at Harvard with Mark Zuckerburg and Facebook – they know nothing can be as big again, and they’re only in their twenties.

As Ray says in my interview with him, he, Elton and Bernie were mates. They were all young and he thought it would get sorted out. Elton said he would honour Ray’s agreement. But time passes and before you know it, it’s 40 years later, he’s in his sixties reading an article in Rolling Stone magazine that conveys him as a nameless character in the middle of a ridiculous coincidence.

You can’t expect Elton John, in every magazine interview to reel out verbatim the full story of Ray’s part in the launch of his career. But you might have thought that in the natural order of things, somewhere in the process of confronting his past, Elton might have found a way to do the right thing and recognise he owes Ray some debt of gratitude.