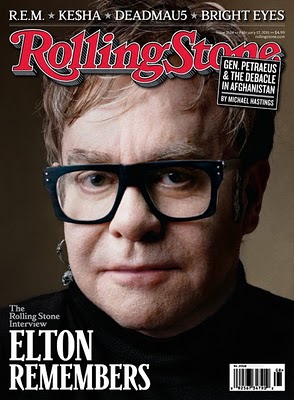 In the new issue of Rolling Stone – on stands and in the digital archives Friday (subscription required) – Elton John reflects on his 40-year career. Just days after the birth of his son Zachary, John speaks about the joys of fatherhood, his enduring relationship with lyricist Bernie Taupin, how he’s mentored Eminem through difficult times – and his true feelings about his longtime friend and tourmate Billy Joel.

“At the end of the day, he’s coasting,” John tells Scaggs.”I always say, ‘Billy, can’t you write another song?’ It’s either fear or laziness. It upsets me. Billy’s a conundrum. We’ve had so many cancelled tours because of illnesses and various other things, alcoholism.”

He goes on to criticize Joel’s past attempts to stop drinking. “He’s going to hate me for this, but every time he goes to rehab they’ve been light,” John says. “When I went to rehab, I had to clean the floors. He goes to rehab where they have TVs. I love you, Billy, and this is tough love. Billy, you have your demons and you’re not going to get rid of them at rehab light. You’ve got to be serious. People adore you, they love you and respect you. You should be able to do something better than what you’re doing now.”

Billy Joel has responded to Elton John’s allegations in the new Rolling Stone that he’s never seriously attempted to curb his drinking habits. “I’ve worked with Elton for such a long time and I’ve enjoyed our relationship too much to let something as random as these comments change my affection for him,” Joel said in a statement. “Elton is just being Elton.”

Other highlights from the piece:

– John explains his controversial decision to play Rush Limbaugh’s wedding. “I could not believe when I was asked to play,” he says. “I thought it was a joke. I had dialogue with him before and he said, ‘I’m not anti-gay, I want you to come, bring David.’ My goal is for Rush to say, ‘I support civil partnerships,’ and if I rang him right now, I think he might agree. He was one of the first people to congratulate us on the baby.”

– He regularly speaks to Eminem on the phone. “We call each other cunts,” John says. “He’s worked really hard at sobriety and it’s changed him so much. He’s also got a great sense of humor. When David and I had our civil partnership, he sent us a present. In a case, on velvet cushions, were two diamond cock rings. So there’s a homophobe for you [laughs].”

– Lady Gaga is one of his favorite new artists. “I’ve heard her new album,” John says. “It’s amazing. The first single, ‘Born This Way,’ is the anthem that’s going to obliterate ‘I Will Survive.’ I can’t think of how huge it’s going to be.”

For the cover story of the new issue of Rolling Stone Elton John sat down with Austin Scaggs for a career-spanning conversation. Here are some key moments from the interview. (To read the whole interview pick up a new copy of Rolling Stone, or sign up for Rolling Stone Plus to read it in our digital archives.)

You played piano and sang on Kanye’s last album, on “All of the Lights.” How’d that happen?

I ran into him in Honolulu last January. He’s a stone-cold genius. He’s like Miles Davis meets Frank Zappa. 808s & Heartbreak is the sexiest record since What’s Going On. He played us the track for “All of the Lights” and it was fucking amazing. It’s like, “Wow, this is something else.” I mean, he sampled Bon Iver! That’s his genius. His new album is a masterpiece.

Central Park was phenomenal; I got to ride in a police car in New York, which was almost as fun as the show [laughs]! I played to 800,000 people at the Colosseum in Rome, with it all lit up. Or the square in Kiev. That was 600,000. I played the Odeon in Athens, where you’re looking up at the Acropolis. Or the Ephesus amphitheater in Turkey, where Mary Magdalene fled after Jesus died.

What moments are unforgettable?

Hanging out with Groucho Marx. Meeting Mae West. Neil Diamond introducing me at the Troubadour. When the Band played an early show in Connecticut, they flew down to see me in Philadelphia. When George Harrison sent me a telegram saying, “Well done, congratulations,” when my album was on the charts just above All Things Must Pass. When I met Bob Dylan at the Fillmore East. He was standing on the staircase and he tells Bernie, “Oh, I really like the lyrics to ‘Ballad of a Well-Known Gun,’” and Bernie goes [fakes heart attack]. There’s nothing like when your heroes rubber-stamp what you’re doing. In 1970, Neil Young came to my apartment and played the whole After the Gold Rush album on my piano until three in the morning. How are you ever going to forget that?