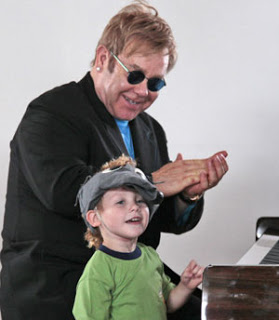 Pop superstar Elton John and his partner David Furnish have become the parents of a baby boy born to a surrogate mother in California, Us Magazine reported.

The weekly said the baby, named Zachary, was born December 25 to a surrogate for John, 62, and Furnish, a 48-year-old Canadian filmmaker.
“We are overwhelmed with happiness and joy at this very special moment,” the singer and Furnish were quoted by the magazine as saying in a joint statement.
Advertisement: Story continues below
“Zachary is healthy and doing really well, and we are very proud and happy parents.”
John and Furnish married in 2005 after 12 years together.
The baby weighed 3.5 kilos (seven pounds, 15 ounces), according to the report, which said the couple would not be discussing any details relating to the surrogacy arrangements.
The star tried to adopt a 14-month-old boy he met while visiting an orphanage in Ukraine last year, but his attempt was blocked by government regulations.
Among the first to react to the news of the birth was the couple’s friend, model and actress Elizabeth Hurley, who wrote on her Twitter page: “Massive congratulations to David and Elton on having their beautiful son. Can’t wait for my first cuddle.”
John has sold more than 250 million records in a career spanning four decades and the singer-songwriter was inducted into the Rock and Roll Hall of Fame in 1994.
His tribute single to the late Princess Diana, “Candle in the Wind 1997” — a remake of his own “Candle in the Wind” — became a phenomenal global success, selling more than 33 million copies, and John performed it at her funeral.
– SMH
Sir Elton John and his partner David Furnish have become fathers after using a surrogate mother in the US.
The boy, Zachary Jackson Levon Furnish-John, was born in California on Christmas Day, the 63-year-old singer’s publicist confirmed today.
Zachary, who weighed 7lb 15oz, is John’s first child with Furnish, with whom he formalised a civil partnership in 2005.
In a joint statement, the couple told USMagazine.com that “Zachary is healthy and doing well” and declared themselves “overwhelmed with happiness and joy at this very special moment”.
The identity of their son’s surrogate mother is being protected by the parents. It is not known whose sperm was used.
The US is one of the most popular destinations for UK citizens hoping to enter into surrogate arrangements. In California, unlike in Britain, surrogates can legally be paid a fee for their services. Sums of £25,000 or more per baby are common.
One of the attractions of going abroad is that some foreign systems of law allow the intended parents to acquire parenthood status after surrogacy automatically. In certain US states, including California, parents who have paid a surrogate can apply for a pre-birth order. This means that they, and not the woman who delivered the baby, will be listed as parents on the original birth certificate, regardless of whose egg and sperm was used in conception.
Though surrogacy is legal in the UK, a surrogate can only be reimbursed with “reasonable expenses”. It is illegal to advertise for a surrogate or for a surrogate to advertise, and it is against the law for a clinic to match surrogates with prospective parents.
Surrogacy has been regulated in Britain since 1985, after Kim Cotton was paid £6,500 to carry a child conceived using her own egg but the sperm of a man whose wife was infertile.
John’s friends congratulated him today on entering fatherhood.
Actor Elizabeth Hurley was among the first to offer her best wishes to the singer and his partner.
Writing on Twitter, she said: “Massive congratulations to David and Elton on having their beautiful son. Can’t wait for my first cuddle.”
– Guardian
The boy, who has been named Zachary Jackson Levon Furnish-John, was born on Christmas Day in the United States.
“We are overwhelmed with happiness and joy at this very special moment,” they said in a statement issued to magazine Us Weekly. “Zachary is healthy and doing really well, and we are very proud and happy parents.” The rock star’s spokeswoman confirmed the report but said no details of the surrogacy arrangement would be disclosed and they intended to respect the privacy of the surrogate. The boy weighed 7 pounds 15 ounces and was 22 inches long.
John, 63, and Canadian filmmaker Furnish, 48, have been together since the early 1990s. They entered into a civil union in 2005 and tried to adopt an AIDS-infected orphan in Ukraine last year, but were thwarted by government regulations.
Their son’s middle name “Levon” is thought to be a reference to John’s 1971 song of the same name, whose lyrics were written by his long time collaborator Bernie Taupin and inspired by drummer and singer Levon Helm.
Speaking in January the singer said: “David and I have always talked about adoption, David always wanted to adopt a child and I always said ‘no’ because I am 62 and I think because of the travelling I do and the life I have, maybe it wouldn’t be fair for the child.” But he said he had changed his mind after their “hearts were stolen” by the child they met in Ukraine, who they were not allowed to adopt. He said he now felt he could “give a future” to a child.