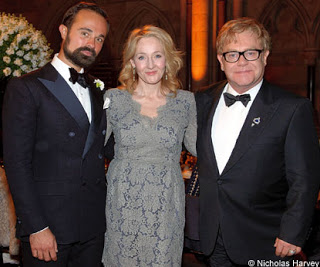 Hosted by Sir Elton John and David Furnish, 130 guests attended the dinner at the Royal Courts of Justice. Mayor Boris Johnson gave a speech and jazz star Jamie Cullum sang at the event.

Words of congratulations from former president Mikhail Gorbachev and Prime Minister David Cameron were read out during the evening, which was attended by Evgeny’s father Alexander, who co-owns Russian pro-democracy news-paper Novaya Gazeta.

Mr Lebedev told guests how delighted he was to hold dual citizenship. He has lived in London since he was eight, and he attended school in the capital.