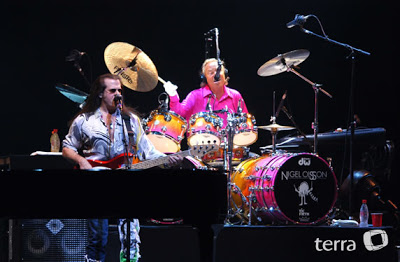 On the band’s “Rocket Man: Greatest Hits Live” tour, Sir Elton John’s drummer, Nigel Olsson, took time to speak with The Daily Toreador about how the band has changed throughout the years, the different places it has performed and to encourage the audience to use the bathrooms before the show begins.

°How’s the tour been going so far?

So far so good, it’s been quite interesting. We’ve been to Cancun, Mexico, and drove to the big ancient pyramids in Chichen Itza and played in front of pyramids, which was amazing. Then we played Corpus Christi which was great and a pretty long show. It’s quite intense, but we’re looking forward to the rest of the tour. It’s going to be great.

°What was it like to play in front of the pyramids in Mexico?

We played right there in front of the big pyramid and was absolutely stunning. It was beautiful. It was way out in the middle of nowhere and it was amazing that you see what these people in the ancient days could do without machinery.

It’s one of the experiences that we won’t forget. We do a lot of those kinds of things. We’ve played in front of the Colosseum in Rome a couple of years back, and that was pretty amazing, too. We get to do stuff that is so amazing; we’re blessed.

°What should audiences expect from tomorrow’s show?

They should definitely go to the bathroom before the show because it’s a very long show. It’s going to be a lot of songs that they know from the beginning through current stuff, and it’s a pretty high energy, so get ready to rock.

°The show is nearly sold out and the other shows from the tour have been just as successful. Why do you think that is?

I think it’s amazing that we can still sell out big stadiums or arenas because we’ve been at it for a while. I’ve been with the band since 1969 and to see that we’re still selling out — it amazes me.

The audience is made up of granddads like me and young kids and it’s just amazing that we can still put smiles on peoples faces especially with the times we’re going through and the depressing things that are happening, we can get up there and hopefully have them give up their troubles and hopefully have some fun.

°How long have you been playing with Elton?

I’ve been there since 1969, since day one. I was with the same publishing company as Elton and Bernie in the ‘60s and Elton asked me to play with some of demo records, which I did. In ‘69 we got together with the original bass player, Dee Murray, and went out on the road for a couple of dates just to promote his songs and he actually wanted other people to cut his songs and he didn’t really want to be a performer.

But we went out and did a couple of shows realized, “Wow, this is cool. Let’s do it for real,” and that’s how it all got started. We enjoyed each other’s musical abilities and went from that. And here we are still.

°What has the ride been like since day one up until now?

It’s hard to explain; it’s amazing that we have been around for so long and we’re selling out places. I think it’s songs that people can identify with and it brings back memories in their lives and stuff like that.

It’s hard to explain, but it’s very fulfilling when we play the big hits that we’ve had and to look out into the audience and to see the people singing the words with us. It’s great and we love it.

°Why doesn’t the band always travel and perform with Sir Elton John?

He likes to go out and do solo stuff and mostly it’s stuff for big corporations and a lot of it is charity. He does charity work for his AIDS foundation which is great.

He’s also going out with Ray Cooper and doing stuff he doesn’t regularly do like album tracks that we don’t do as a band and it’s a whole new format for him. He works all the time — he’s a workaholic and he loves what he’s doing and I think it’s a great thing. Plus it gives us a little time off.

°Do you enjoy going out on tour as much as he does?

It can sometimes get grueling, especially the travel. Especially in Europe because it’s quite hard to get around Europe and especially when you’re going around commercial airports. Now’days with all the security, it’s pretty grueling when we have to travel long distances, but we still enjoy it. It’s a great thing and it’ll last a long time and we’ll just keep getting it done.

°In February of 2000, Elton was the first performer in the United Spirit Arena and this concert will be the 10-year anniversary of the arena opening. What do you think of that?

I think it’s great that he can come back and do what he’s doing and that we’re still selling out places, and having fun doing it. And making people happy, that’s the key of the thing is to make people happy which is a great thing. To put it in a nutshell, we’re really looking forward to coming out to see you guys.