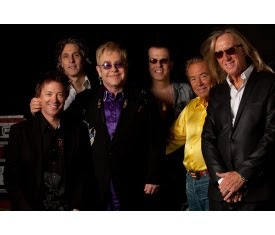 Elton John, the most successful male recording artist according to Billboard, performs July 25 at the Lake Tahoe Outdoor Arena at Harveys.

It will be John’s first Tahoe appearance. He played in 2001 at Reno’s Lawlor Events Center.

John will perform with two of his original band members from the early 1970s, when he began a string of seven-straight No. 1 albums, including “Madman Across the Water,” “Honky Chateau,” “Don’t Shoot Me I’m Only the Piano Player” and “Goodbye Yellow Brick Road.”

“We’ve been working on this for some time,” said Harrah’s-Harveys Director of Entertainment John Packer. “We wanted to make a statement with this outdoor concert series that it’s going to be bigger and better than ever. Having Elton John is huge for something in this size market.”

The Billboard Hot 100 All-time Artists ranked him first among male soloist and third overall behind The Beatles and Madonna.

“To have a musical genius and cultural icon of his stature perform on our stage this summer is exciting news indeed,” said John Koster, the regional president for Harrah’s operations in Northern Nevada.

John will perform at Tahoe with his original drummer, Nigel Olsson, and guitarist, Davey Johnstone. Also in the band are bassist Bob Birch, percussionist John Mahon and keyboardist Kim Bullard. The concert is called “Rocket Man — the Greatest Hits Live.”