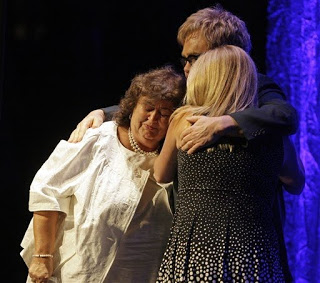 A man, a microphone and a piano can filled the stage at Clowes Memorial Hall during a benefit Wednesday to mark the 20th anniversary of Ryan White’s death from complications of AIDS.
Pop recording legend Elton John performed after appearances by former talk-show host Phil Donahue, actress Judith Light and Ryan’s mother, Jeanne White-Ginder, to a sold-out crowd of nearly 2,200.
Concertgoers paid $150 to $500 to watch John Sir sing for about an hour, with the proceeds going to the The Children’s Museum of Indianapolis and the Elton John AIDS Foundation.
He began with “Your Song,” a crisp, clear rendition that sounded as if he recorded it yesterday. With arms thrashing at the keys, John’s reflection in his piano sang back at him.
The earring in John’s right ear twinkled in the spotlight as he stood several times to play the piano — a feat he used to leverage audience applause.
At times he was accompanied by background recordings, but John’s performance proved he can still pound a piano after more than 40 years in the business.
It wasn’t until the third song, “Philadelphia Freedom,” which began with an introduction, that the audience began to sing along and become more energetic.
John’s first standing ovation came with “Rocket Man,” in which his dramatic seven-minute, echo-laden version more than made up for the fact that the 63-year-old singer can no longer hit the high notes.
He sang all his classics — “Tiny Dancer,” “Candle in the Wind,” “Don’t Let the Sun Go Down on Me” and “Crocodile Rock” — but it was “Skyline Pigeon,” the song he sang at Ryan’s 1990 funeral, that the crowd seemed to be waiting for.
– Indystar.com
Elton John says he’s been sober for 20 years, since shortly after the death of an Indiana teen with AIDS who the musician credits with inspiring him to turn his life around.
John was in Indianapolis on Wednesday to headline a benefit celebrating the life and legacy of Ryan White. The 18-year-old died on April 8, 1990, about five years after contracting HIV, the virus that causes AIDS, through a tainted blood transfusion to treat his hemophilia.
The singer befriended the boy during his public battle for acceptance after he was banned from a central Indiana school at age 13, bringing national attention to HIV/AIDS education and the plight of children with HIV in the 1980s. John was at Riley Children’s Hospital when White died and was a pallbearer and performed at the funeral.
“It was one of the greatest things in my life to meet Ryan’s family, to be there the last week to try and help, and then for that wonderful message that he gave me to change my life around,” John told The Associated Press before the Wednesday evening benefit. “It was weird to take stock and think of it — I’m 20 years sober this year, and it’s 20 years since Ryan died, because I got sober shortly afterward.”
Proceeds from the event, which was being hosted by Phil Donahue, will benefit the Elton John AIDS Foundation and the Indianapolis Children’s Museum’s “Power of Children” exhibit, which features White.
John established the foundation two years after White’s death. The organization funds innovative HIV prevention and education programs, works to eliminate stigma and discrimination associated with HIV/AIDS, and provides direct care and support services for patients.
The 20-year anniversary of White’s death is an opportunity to restart a dialogue about AIDS and push for educating children about the disease, John said.
“Every 10 years, a new generation of kids come up, and we see the numbers go up, because we can’t really get to them in school,” John said. “We never could. Education about sex and education about AIDS was totally forbidden. That could have saved so many more lives, because children are smart. Children will listen. You don’t have to threaten children, you just have to inform them.”
“It took a child to die to make people sit up and notice,” he added.
White’s mother, Jeanne White-Ginder, said John’s return to Indianapolis was a bittersweet reminder of her son’s last days.
White-Ginder said John played “secretary” during White’s final days, filtering phone calls and telegrams and making sure those who sent flowers were acknowledged.
“One of the most beautiful scenes I think I can remember is walking into Ryan’s room and seeing Elton standing on a chair decorating Ryan’s room,” White-Ginder said Wednesday. “He said, ‘When he wakes up, I want him to know how much he was loved.’ That really touched me as a mom because I hadn’t thought to do that.”
She said it was special to have John back to mark the 20th anniversary of her son’s death.
“I’ve always felt like he was my guardian angel,” she said.
John gives similar credit to White-Ginder, and to the family that helped him find purpose.
“Jeannie’s incredible fortitude in going through this as a mother — I never saw her crack. The last week, there were some tense moments, and it was very emotional, but I never saw Ryan crack,” John said. “It was just an amazing lesson in how to live life in the best possible way.”