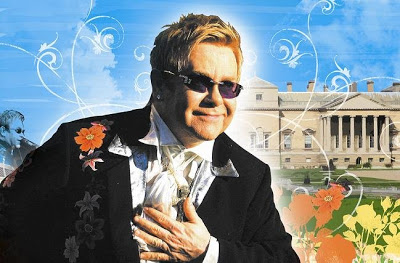 Elton and the band are to play concerts in Colorado Springs, Rapid City, Laramie and Denmark. The Denmark date is June 16, 2009, Sonderborg Castle, Sonderborg, Denmark.
—-

After years of playing his “Red Piano” show to a sold-out Las Vegas theater, Elton John is back on the road.

“Ten years ago, Sir Elton did a concert in Laramie to benefit the Foundation,” Judy Shepard, the foundation’s executive director, said in a statement. “It was wonderful beyond description. He is a gracious and generous human being. We are sincerely grateful for his continuing support.”
John, who has sold more than 200 million records, is playing these dates with his band after a couple weeks of touring with fellow pianist Billy Joel. On April 7, he’ll be back at Vegas’ Caesar’s Palace for another string of “Red Piano” dates.

The Rocket Man is returning to South Dakota. Elton John will perform in Rapid City on Wednesday, April 1 as part of his 2009 tour: Rocket Man, Number Ones.

Ticket prices range from $47 to $97; there is a limit of 6 tickets per customer.