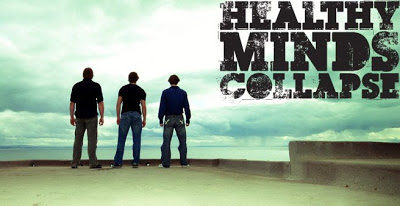 Two Methil brothers are primed to hit the big time this year – thanks to Elton John. The superstar has signed-up Andy and Colin Malcolm who, along with bassist Angus Schroder, make up the band Healthy Minds Collapse.

A Christmas Party brought the group south to Elton’s London offices, where they met other 21st Artists including Lily Allan and James Blunt. It marks a surreal turnaround for a group which has spent eight years rehearsing in their Dad’s garage in Wellesley Road.

Lead singer Andy (28), explained: “It all kicked off when Elton heard our stuff. He absolutely loved it. When you are facing him it’s like meeting royalty. It’s literally unbelievable!”

The band were asked to support Elton’s Perth gig in July 2009 and the heat is now on to put an album together. Andy and drummer Colin (25) were destined to have music in their blood. Their dad, John Malcolm, played with sixties group The Troggs – best remembered for their songs ‘Wild Thing’ and ‘Love Is All Around’. He also entered the qualifiaction competition for a place at the 1976 Eurovision Song Contest as Joey Valentine, losing out to Brotherhood of Man.

Andy said: “There were always guitars lying around the house, so it was only a matter of time before I picked one up. I needed a drummer so…”

Healthy Minds Collapse represent a new breed of thoughtful gritty rock heavyweights, with a sound inspired as much by The Cure as Nirvana.