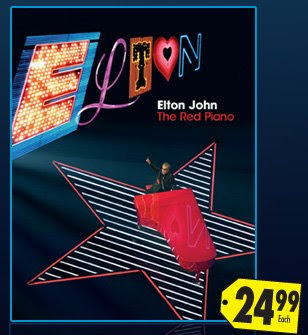 This DVD/CD set available at Best Buy and BestBuy.ca/Elton John promises to bring this amazing entertainment experience to Elton John fans across the continent.

Available as a 2 DVD/2 CD set in standard definition or a 1 Blu-ray disc/2 CD set in high definition, the concert features the 14 song performance of the Red Piano show including all of the fan favorites such as Candle in the Wind, Believe and Rocket Man. The DVD and Blu-ray discs feature a documentary about the making of The Red Piano show including footage of Sir Elton discussing the genesis of the show.

The show debuted to critical acclaim in February 2004 with reviews proclaiming it as “A must-see” and noting Sir Elton is Still Standing as an indestructible talent. Using a red piano as a starting point, John enlisted his friend and photographer David LaChappelle to develop art and imagery that would complement the music and enhance the experience for the audience. The production raises the bar for Las Vegas performance featuring multi-color neon sculpture, pop art, inflatables, baubles, balloons and the band.

Viewers may have a good time just taking the show in at its surface (lights, inflatables and colors) or use their imagination to find the deeper meanings in the show. “It’s (the show) what I like from an artistic point of view,” noted John. “It’s fun, it’s deep, it’s the songs I really love and it gives me a chance to get across what I am all about, visually as well as musically.”

In 1967 Elton John was introduced to Bernie Taupin, and so began one of the most prolific and successful songwriting partnerships ever known – a seemingly timeless alliance that fans continue to appreciate to this day. The Red Piano further highlights these incredible talents. “With the incredibly successful sale of Dream Ticket it was clear that our customers are huge Elton fans and we believe they will be thrilled with the incredible show experience he gives them with the Red Piano,” said Paul Fisher, director of entertainment merchandising, Best Buy Canada. “This incredible collector’s item allows his fans to experience a must see show from the comfort of their own home with the DVD or Blu-ray disc and enjoy its musical excellence anywhere with the CD live audio soundtrack.”

Elton John’s career has spanned four decades and he is one of the top-selling solo artists of all time with more than 50 Top 40 hits credited to his name. He has won a wide array of industry awards including Grammys, Tonys and an Oscar and continues to add innovative work to his personal repertoire of 35 gold and 25 platinum albums.

Elton will bring the Red Piano show back to Caesar’s Palace Las Vegas later this year from October 22 – November 9 and again next year for a series of shows from February 3 – April 22.